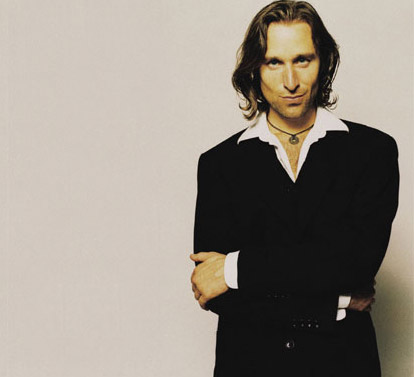 "This man has never-ending energy. A phenomenal discovery. An open-minded, extremely well trained pianist/composer of many talents that will make it to the top." - Jazz (Switzerland) The classically-trained pianist (who studied with several teachers including Mordecai Shehori, a disciple of Horowitz, and Claude-France Journes among others)and jazz legend Jaki Byard is a graduate from Berklee College of Music (Bachelor of Music) in Boston and from Manhattan School of Music (Master of Music) in New York City. This Steinway Artist was one of five finalists at the Great American Jazz Piano Competition and was selected for the Concours International de Piano Jazz Martial Solal in Paris. He is the recipient of many prizes and awards including the Berklee College of Music's Jazz-Performance-Award ('94), Manhattan School of Music's President's Award ('95 & '96) and Germany's Scala-Award ('99) for artist of the Year. Cornelius has performed at some of the most prestigious venues and music festivals including; the Blue Note, Steinway Hall and the Knitting Factory in New York, the Montreux Jazz Festival, Munich Philharmonic Hall, Theatre des Halles in Paris, Fondacion Miro in Barcelona and the Centro de las Artes in Mexico City, various concert halls in Cuba and many other places around the work. He has performed and recorded with some of the most respected jazz musicians in the world including; Herbie Hancock, Salif Keita, Miles Davis last saxophonist Kenny Garrett, saxophonists Bobby Watson and Greg Osby, bassist Anthony Cox and drummers Marvin Smitty Smith, Will Calhoun (Living Colour) Terri Lyne Carrington and pianist Joachim (piano duo) among many others. He has recorded with several prestigious recording companies including; enja records, and Arte Nova/BMG. Cornelius Claudio Kreusch (or C.C.K. amongst friends) also writes, records and produces under the ageis of Goldfinga allowing him to extend his unbridled talents outside the scope of jazz to include; classical, world, ambient, new age, and music for film. As part of a musical family, he also produces music for children with his mother; classical pianist, songwriter and author Dorothee Kreusch-Jacob and the CDs of his brother, classical guitarist Johannes Tonio Kreusch. As a business man and entrepreneur, Cornelius is the Founder & CEO of one of the world's most sophisticated digital music aggregating companies in the world MUSICJUSTMUSIC. "Charisma of a superstar. One of the most important discoveries in jazz worldwide!" Suddeutsche Zeitung (Germany) "A genius at the piano - IRD (Italy) If Cornelius Claudio Kreusch had not existed, the recording industry would have invented him." Prinz (Germany) "Extraordinary Pianist." Blue Note (New York) "An amazing career lies in front of this guy." - Excelsior (Mexico)
Back

Time Out, New York (USA): "Kreusch is akeyboardist with friends in high, high places. That's why BlackMudSound, his expansive new band, mixes free-wheeling jazz with funk and influences from the Dark Continent. It's a wild ride." Twin Cities Reader (USA): "A hard-driving, dazzling, funky pianist, Cornelius is a young lion not content to recycle the 60's in a designer suit. His recent BlackMudSound delivers ample surprise, visceral rhythms, great solos, fresh composing twists and as much throbbing energy as latter-day Miles or Ornette." The Skanner (USA): "There is something about their musicianship and singleminded purpose that is strongly reminiscent of John Coltrane's quartett with McCoy Tyner, Elvin Jones and Jimmy Garrison." Keyboard (USA): "On the other hand, sometimes you just like to hear some cats blow. ...Cornelius' steely assertive piano ties it together with taut solo lines and two-fisted chords... Very satisfying!" Star Tribune (USA): "The democratic bandleader inspires his cohorts with tunes that stimulate both the mind and the feet... Listen up!" Jazztimes (USA): "Superior playing." Option (USA): "An accomplished, hard-swinging pianist with a clarity of touch and an ability to hammer in a climactic series of notes... Good stuff, especially, if acoustic jazz does'nt have enough groove for you." Boston Journal (USA): " The righteous rap of the 90's!" Echoes, Black Music Weekly (UK): "BlackMudSound has really grown on me... it shapes as a very coherent reading of jazz with contemporary African sensibilities." Jazz & Blues (UK): "The BlackMudSound excites right from the start. ...Cornelius' artful jazz themes are right on target." Village Voice, New York (USA): "The pianist's thick and steamy lines are central to his self-determined BlackMudSound, and though they're earthy, they're seldom messy. He likes that mud to splash, so try not to get any on you." Jazzman (France): "An explosif pianist... The revelation!"
Update Required To play the media you will need to either update your browser to a recent version or update your .
Download
Contact Information
Information Request
亚洲国内自拍愉拍欧美色中色亚洲欧洲日韩极速播放中文字幕久荜在线国产亚洲色视频在线亚洲中文字幕在线精品亚洲色情视频在线